We are a tribe that was born out of mission

Nearly 160 years ago, Swedish immigrants settled in the United States having come to America primarily because of religious persecution. These followers of Christ had a strong conviction about the Bible as the Word of God. They believed in believer’s baptism by immersion. And they had a strong conviction about living a holy life as followers of Jesus Christ. They began to reach other Swedish immigrants with the life changing message of the Gospel. They eventually organized as a fellowship of churches called the Swedish Baptist General Conference.

The Baptist General Conference became the new name of our family of churches by 1945 as English became the predominant language used in our churches and as more and more non-Swedish churches were planted and organized. While the landscape of the U.S. dramatically changed, the core values of the BGC remained the same. We continued to affirm unequivocally, the Bible as the Word of God. A clear conviction about believer’s baptism and regenerate church membership remained strong. And the same concern and conviction for distinctive, strong Christ-like living in a pagan and secular world, characterized our movement. As a missional movement, the Baptist General Conference became a beautiful multi-ethnic, world-wide family of believers and churches, diverse, yet committed to the common mission of fulfilling Christ’s great commission for the church.

Converge Worldwide has made several name changes over its history in order to address the changing composition of its church attendees. As the ethnic makeup diversified, the original Swedish Baptist General Conference of America became the Baptist General Conference. Toward the end of the 20th century, that name began to lose its cultural currency. 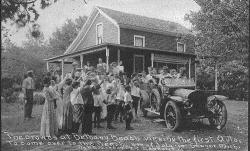 More than a fifth of all BGC churches have been planted within the past 18 years. In order to seek a receptive audience in their communities, a scant few wanted to identify themselves by the name Baptist. They held to Baptist convictions but did not want to spend precious time refuting stereotypes of other Baptist leaders or groups. Meanwhile, the name Baptist was putting valuable missionaries and their national partners at risk in several countries overseas.

Converge leaders saw the need to make a change. In 2008 the board of overseers approved a new missional name, Converge Worldwide, while retaining the historic name Baptist General Conference in some settings and for legal purposes. Many church planters and missionaries find the new name helpful in their efforts to expand Christ’s kingdom. Our historic beliefs and values stand unchanged, but the new name helps new generations to continue the mission begun many generations before.  At the 2018 biennial meeting, constituents voted to remove Baptist General Conference as the movement's legal name and replace it with Converge.