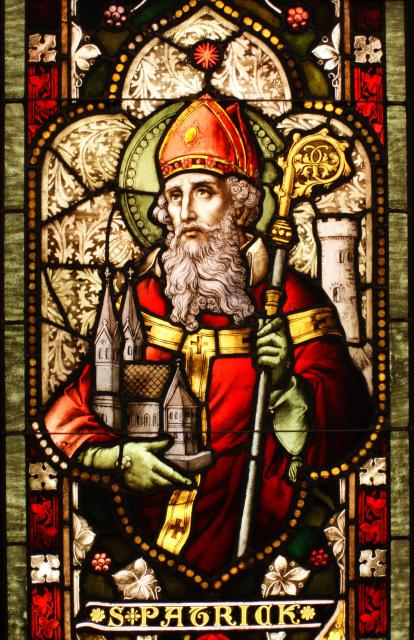 The Heartland District is filled with the influence of St. Patrick. Whether we recognize it or not, many, if not most, Roman Catholic churches in the Heartland region originated with some element of Irish involvement. Even though Evangelicals and Catholics have some theological differences, Evangelicals should still take a moment to thank God for the Catholic Church’s strong societal influence and Biblical stance on issues such as marriage, the sanctity of life and the Triune God. Beyond this, before the Reformation, nearly all Western missionaries were Catholic. Many of these Catholic missionaries lived lives of exemplary surrender to Christ that provide us with lessons that have endured to this very day. Such is the life of St. Patrick. The following seeks to unfold five enduring and applicable lessons from his life.

THE IMPORTANCE OF A PERSONAL WALK WITH CHRIST

Though dates surrounding St. Patrick’s life are not completely certain, it is generally accepted that he lived and served for the majority of the 5th century. Raised in a northwestern village of Roman Britain as the son of a Catholic deacon and the grandson of a Catholic priest, Patrick did what many children of clergy do. He rebelled. It was during his teen years that he questioned the faith of his fathers. However, this was a period of doubt that was relatively short-lived. At the age of 16 he was abducted as a slave and taken to the pagan island of Ireland. For six years he served under a pagan master, doing menial chores and tending sheep. It was during this time that Patrick meditated on the scriptural truths of Christ, which he had been taught from his childhood. While serving alone, as a slave, he quietly confessed faith in Christ and began openly living for Him.

THE IMPORTANCE OF TRUSTING GOD’S PROMPTINGS

After six years of slavery, Patrick received a vision in a night dream that a boat was waiting to take him back to Britain.  Receiving this as a vision from God, he risked his life by running away from his slave master. As a fugitive, he stealthily traveled by foot, for nearly 200 miles, until he reached the coastal port. Remarkably, a boat was in the harbor. After some debate, the boat captain brought him aboard, if even as a slave to be sold, and they set sail for Britain. Along the way, a storm led them off course and they landed in a desolate part of Britain. Looking for a town, the crew wandered for 28 days, nearly starving. It was then the crew requested Patrick call on his God for food. Patrick prayed and, shortly thereafter, wild boars began to cross their path, saving the starving crew and revealing the power of the living God. Finally, after six hard years, Patrick returned home.

Not long after being home, Patrick experienced an unexpected call into the gospel ministry. Describing his call, he wrote,

I saw a man coming, as it were from Ireland. His name was Victoricus, and he carried many letters, and he gave me one of them. I read the heading: “The Voice of the Irish”. As I began the letter, I imagined in that moment that I heard the voice of those very people who were near the wood of Foclut, which is beside the western sea — and they cried out, as with one voice: “We appeal to you, holy servant boy, to come and walk among us.”

Through his late teens and early adulthood, Patrick had learned to walk by faith and trust God’s promptings.   However, his call to serve as missionary to the Irish people demanded that he follow God in becoming better prepared for the work of evangelism and church planting among pagan tribes.  Ultimately, this required Patrick to seek the confirmation, assistance and commissioning of the Church in Britain.

By this time, Patrick was probably no older than 24. The order of church authority in Roman Britain went from deacon, to priest, and then to bishop, but Patrick was not old enough to serve in church leadership and so he apparently committed himself to an intentional discipleship process under a Catholic bishop. Not much is recorded about this, but because Patrick was abducted at age 16, he was not able to complete his final level of schooling which would have honed his oratory and writing skills both in his mother tongue and in Latin.  Later writings from St. Patrick’s help us understand that these became components of his ministry training.

As Patrick trained to become a bishop, theological battles raged throughout the Roman Empire and especially Britain. Two heresies were being spiritually and physically fought on multiple fronts. First was Arianism which rejects the Triune God, denying Jesus as equal to God and denying that the Messiah had come in the flesh. The second heresy stemmed from Britain-born Pelagius who taught the far-reaching heresy that original sin did not taint our human nature. Besides these theological challenges, when Patrick finally landed in Ireland, he was faced with a broad range of anti-Christian and violent pagan teachings from the Irish Druids. It was a matter of necessity that Patrick was solid in his ability to rightly divide and accurately communicate the Word of Truth.

THE IMPORTANCE OF INCARNATIONAL MINISTRY

When Patrick was ordained as a Bishop, he had barely cleared the minimum age requirement of 30. However, his credentials and life experience were of strategic importance to the Catholic church because a growing number of Irish Christians were making requests for a bishop to be sent to Ireland. Patrick was not the first bishop to be sent to Ireland, however the first bishop only lasted a year before departing. Patrick was also not the first Christian in Ireland as some small gatherings of Christians had already formed. Patrick was, however, the first Catholic bishop to come to Ireland and minister incarnationally to the Irish people.

Perhaps his six years of slavery had educated him on how the various Irish tribes lived and ordered themselves. He certainly understood the local traditions, superstitions and customs. He was able to minister in the heart language of the Irish people and to live among them in a way that looked similar to them, while still remaining separated unto Christ. Incarnational ministry is what Paul is referring to in Philippians 2:5-11 when he states that Jesus humbled Himself to come and live as the Servant-King-Redeemer among His creation. The most effective Christian leaders have always been those who lived among the people, able to empathize with and minister to their spiritual plight, joys, sorrows and felt needs.

THE IMPORTANCE OF CHURCH PLANTING

Patrick went to Ireland out of obedience to Christ and to answer the call to “come and walk among the Irish people.” His journey, however, was not a nomadic mission trip. Patrick went and stayed to establish Christ’s church among the Irish people and to equip them for living obediently to Christ’s commission and command. He was commissioned in the spirit of Paul’s commission to Titus, understanding that he was placed on the island of Ireland, “to set in order what was lacking and appoint elders in every town” (Titus 1:5). From the days of his childhood slavery, Patrick had no misconceptions about who the Irish were. He knew that, like the Cretans, they were barbaric pagans.  Just as the Apostle Paul instructed ministers, Patrick did the “work of an evangelist” (2 Timothy 4:5), proclaiming Christ to the Irish and urging them believe in Jesus Christ as their Lord and Savior. It is clear that the first and foremost task of Patrick’s missionary work was the gathering of called out saints into an ever-expanding community of believers called the church. And lest we wonder what Patrick was teaching in those churches, here is the creed that they regularly recited:”

There is no other God, nor ever was, nor will be,
than God the Father unbegotten,
without beginning, from whom is all beginning,
the Lord of the universe, as we have been taught.

And His Son Jesus Christ, whom we declare to have always
been with the Father, spiritually and ineffably begotten by the Father
before the beginning of the world, before all beginning;
and by him are made all things visible and invisible.
He was made man, and, having defeated death,
was received into heaven by the Father;
and he has given him all power over all names in heaven,
on earth, and under the earth,
and every tongue shall confess to him that Jesus Christ is Lord and God,
in whom we believe, and whose advent we expect soon to be,
judge of the living and of the dead,
who will render to every man according to his deeds.

And He has poured forth upon us abundantly the Holy Spirit,
the gift and pledge of immortality,
who makes those who believe and obey
sons of God and joint heirs with Christ;
and him do we confess and adore,
one God in the Trinity of the Holy Name.